Tom’s most popular work and an integral part of the Liverpool Tourist trail. Since its unveiling in 1997, thousands of football fans across the world have been pictured with this Sculpture which stands at the entrance to Anfield. 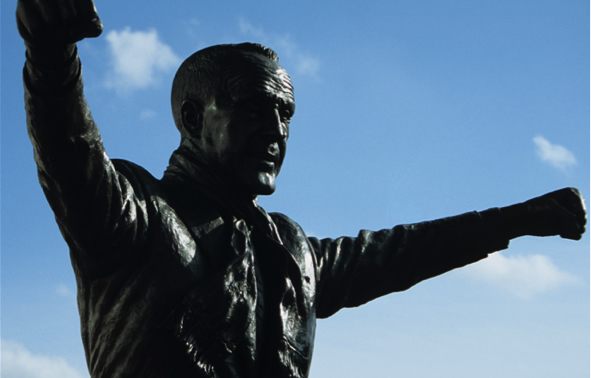 Commissioned by Calsberg Internation for Liverpool Football Club, it is cast in bronze, stands 14 feet high off the ground on a plinth of Scottish granite – in deference to Shankly’s Scottish Mining background. It is still one of Tom’s most popular works and is seen on television channels all over the world at every football match.

A tribute about the Sculpture of Bill Shankly was written in ‘The Kop’ in January of 1998;

“They swear they saw a miracle at Anfield on December 6, and sadly it wasn’t on the pitch. As Liverpool succumbed to Manchester United on one side of the Kop, behind the great grandstand the new bronze statue of Bill Shankly shed a tear for his old team’s troubles.

“The liquid spied trickling down the legendary manager’s chiselled features was of course the rainwater of a grey Merseyside winter, but even the absence of paranormal phenomena will not prevent the landmark becoming a footballing icon of religious proportions.

“A tribute to the man who made Liverpool great will prove as big a draw for the Anfield faithful as any weeping madonna or milk-secreting Budda would for other congregations. A new airport may not be required to cope with the influx of pilgrims, but since its first weekend matchday the statue has provided a fresh focal point for the fan’s arrival at the ground.