And it was that people power which ultimately proved responsible for a statue to the great man finally being unveiled at Goodison Park.

More than 500 Evertonians swelled the pavement on the corner of Goodison Road and Walton Lane in May 2001 to witness the unveiling of a larger than life bronze figure.

And local artist and sculptor Tom Murphy revealed that he approached Everton about the possibility of sculpting their most famous figure, after being inundated by requests from Evertonians.

He revealed: “I actually wrote to Everton to see if there was any interest, which I don’t normally do, because so many people had stopped me and asked me if I would do one.

“Everton said they were thinking about it anyway and it took of from there.”

After successful sculptings of some of the city’s other famous sons, like John Lennon, Bill Shankly and Cecil & John Moores, Everton were delighted with the finished product.

Chairman Bill Kenwright cut the blue ribbon with Dixie’s son, Geoff – watched by daughter Barbara, grand-daughter Melanie and great-grandchildren Daniel and Scarlett in three generations of the Dean family – and paid tribute to the player. 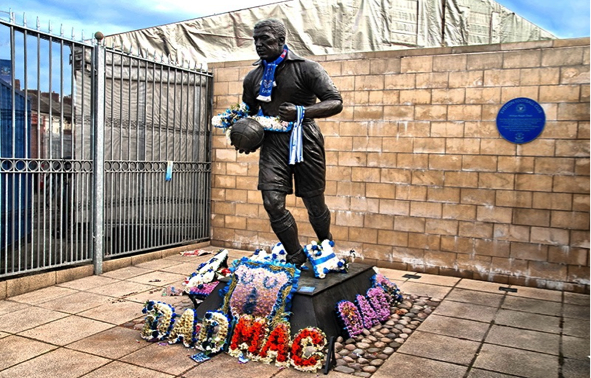 “The word legend is a much abused and over-used word in our game.” he said. “A game when the pay packet seems to rule these days and ego seems to rule, and there’s little of the hero in some of the people who wear shirts up and down the country.

“Today we salute probably the greatest hero of all time – our beloved William Ralph ‘Dixie’ Dean.”

“I put a lot of power into the figure.” added sculptor Tom Murphy. “In this pose you can see he is totally switched on. His muscles are powered up, he is determined and ready to go.”

The pose is so striking it was later used by Everton to form the centre-point of the 100 seasons of Top Flight Football logo sewn onto the club’s shirts.

Bill Kenwright wrapped up the ceremony saying: “Dixie Dean was an inspiration to his fellow footballers. He was a God to them and he was terrifying to the opposing team.

“In this world you often hear ‘Never, say never!’ But I think there is one ‘never’ in football that’s a truism: Dixie Dean’s record will never, ever be beaten.

“Dixie Dean’s memory will never be forgetten by people who love football. Today we celebrate the greatest goal machine in the history of world football.”