The thousands of Liverpool civilians killed by German bombers during World War II received a fitting tribute in their honour when Tom Murphy designed his sculpture for the Liverpool Blitz Memorial. 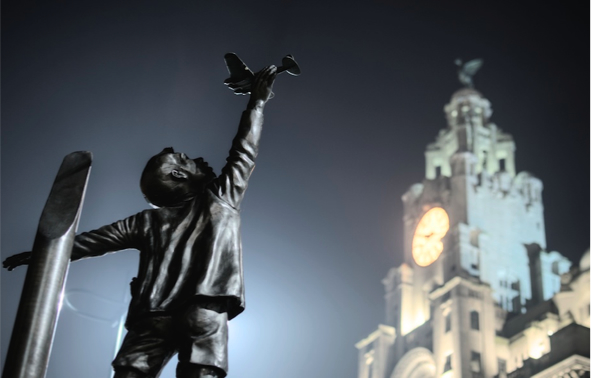 The final sculpture was cast in bronze and sited on the grounds of St Nicolas Church near the Pier Head. The poignant statue features a mother with babe in arms, beckoning her playful son to leave his toy plane and seek shelter from the bombs.

The scheme, which had cross-party support on Liverpool council and had the backing of the Rector of Liverpool, Canon Nicholas Frayling, is the brainchild of labour councillor John Livingston.

He said: “Around 4,000 civilians were killed and 10,000 injured, during the Second World War in Liverpool – which was the most bombed provincial city in the country.

“That death toll was the terrible price
paid by the ordinary men, women and children because of Liverpool’s role in the Battle of the Atlantic.

“The only memorial we had to those Liverpool lives lost during that war is an addition to the Cenotaph.”