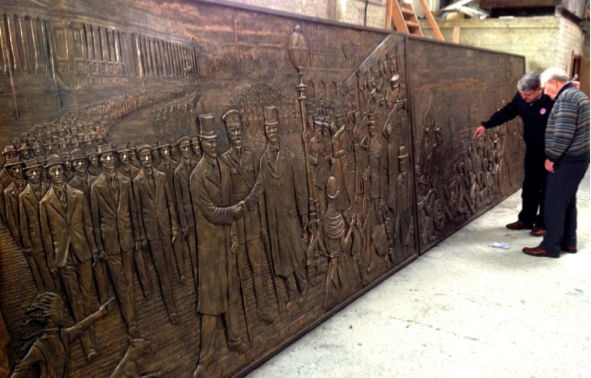 Panel one focuses on the recruitment and departure of the newly formed Pals Battalions. To the extreme left of the frieze, we see: a policeman and behind him a brass band playing. There’s a policeman on a horse and people waving flags as the crowds cheer with excitement. 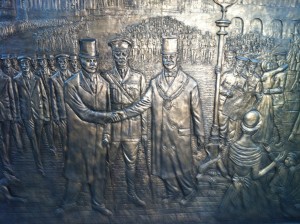 In the centre of the frieze, the Lord Mayor greets Lord Derby (who conceived the idea of Pals regiments) and Lord Kitchener. The new recruits, still in civilian clothes, proudly march forward. The men are made up mostly of white-collar workers from a wide range of Liverpool businesses.

A boy and a dog rush into the scene. The ragged boy imitates the pointing finger pose of Lord Kitchener’s famous recruitment poster and the dog growls and barks. In the background on St Georges Plateau, we see the enlisted men in three groups. These represent recruitment, training and the finished soldiers.

A cat stalks a rat behind the distinctive dolphins that decorate the base of the lamp posts on St George’s Plateau. In the distance, we can just make out Professor Codman’s Punch and Judy show symbolising the unrest in Europe.

After the lamp post scene, we are now in Lime Street station where crowds of excited soldiers make their final goodbyes. A group of soldiers read about the football results. In the foreground, we see a soldier holding his webbing.  In front of him are his wife and son who will appear again in the last panel.

On the train, soldiers are leaning out of the windows to say goodbye to their loved ones. Most of the characters look elated but some are filled with foreboding. From the last carriage window, a ghost-like soldier points with his skeletal hand to the next panel, foretelling the horror of war that awaits his friends.

The stationmaster is the last character in this panel. He stands ready to blow his whistle sending the trainloads of Liverpool’s finest men to their fate.

Over 6,000 men left Liverpool in the Pals Battalions. Many for the last time..

On the extreme left of the panel sit two soldiers who are making the burial markers for the dead. The older soldier comforts the younger man. Behind them, by the side of an enormous artillery gun, stands a silent soldier lost in thought as he reads a letter, again and again. A wrecked tank dominates the background.

To the right of the tank, stands an officer who ceremoniously checks his watch for the 11 O’ Clock deadline; his free arm is raised like an umpire ready to signal the end to the deadly game of war. 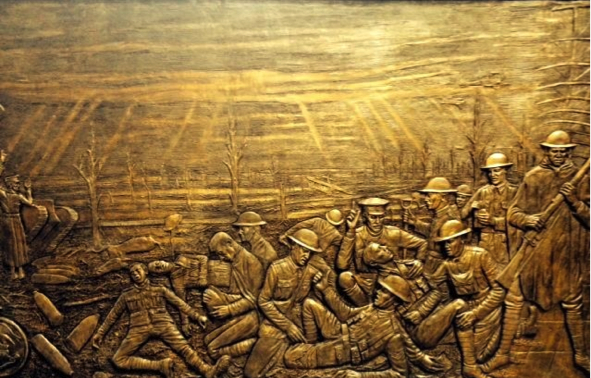 In the foreground, two dead soldiers lay as they fell, like discarded puppets, flanked by two kneeling soldiers who mourn the passing of their friends. In the middle of the frieze in the foreground lies a wounded Sergeant. He angrily gestures to a soldier that has come to his aid, to see to the critically wounded soldier behind him.

The older man, a Padre administers the last rights, as if the boy soldier was his own son and to his left, a RAMC medic also gives aid and comfort. In his hand, is a letter from his mother.  Ominously, behind the group, a member of the burial party looks out vacantly as he smokes his pipe his shovel at the ready. Two worried soldiers in the rear look on as one of them slowly unscrews his water container wondering if it is too late.

The next character we encounter, is a standing soldier wearing a poncho. One of his feet is placed in France and the other foot in his Liverpool home. He stands on guard as he dreams of home. This figure represents what soldiers are: ‘guardians of our country,’ who must, if necessary, make the ultimate sacrifice. He, like all the characters depicted, dreams of home.

Behind the men, we see the desolate war torn landscape of scorched earth, tortured trees and mud-filled shell craters. Yet above, a clearing sky marks hopefully, a new beginning, as two planes fly back to base. All the characters in both friezes are remembering something important to themselves. In the next scene, some of the surviving Liverpool Pals returning to Lime Street .

A lone soldier walks ahead; he is severely wounded, having lost a leg and has been blinded in one eye.

His wife, who we saw in the first frieze saying farewell to her husband as he was bound for the front, stands desolately in the foreground. She pretends she has not seen her husband, as she looks away to hide her shock. The hat she wears is reminiscent of the helmets the soldiers wore in battle. This symbolises the battle now raging in her head as she contemplates the future with her wounded and battle scarred husband. 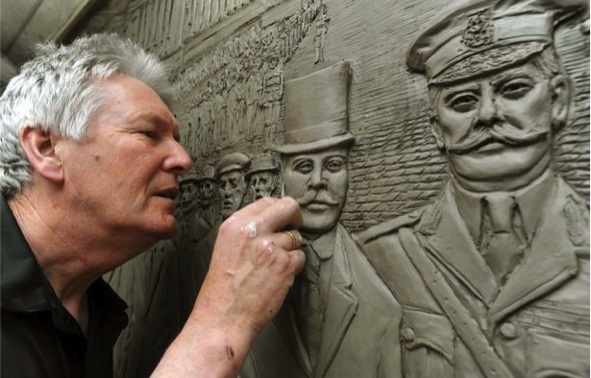 Meanwhile her young son, now four years older, proudly salutes his brave father’s return. He is a lonely believer, as the discarded recruitment posters blow along the platform. The giant steam engine that brought the men home, angrily spouts out smoke and steam which mingles with the massive girders in the roof of the station. The station is depicted in this part of the frieze, as a giant spider’s web from which the men are emerging.

On the extreme right, the last scene is set on August 31, 2014, the date of the unveiling. The date on which we officially commemorate a century later, the men that were lost, wounded and traumatised in WWI. The three service personnel stand in remembrance, one of whom is a woman. This women is a reference to the extraordinary contribution and sacrifice of woman at home and abroad in WWI. The remembrance ceremony takes place on St Georges Plateau, where the original recruitment took place. Finally, the bugler plays the last post.

The Liverpool Pals’ Badge of ‘Lord Derby’s Crest ‘ the distinctive ‘Eagle and Child,’ features on their bottom left corner of both panels