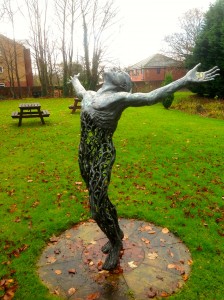 On Sunday 22nd July 2001, Tom revealed his bronze creation in the grounds of a bail hostel. The 6ft figure of a man, called ‘Courage Within’, was the result of a collaboration involving 29 temporary residents of Southwood bail hostel in Aigburth.

It is thought that the sculpture is the first link up between the probationary service and the arts world as a means of rehabilitation.

Tom said: “I could have never done this without the support and views of the lads in the hostel and the sculpture represents, I hope, the courage needed to change one’s life for the better.”

The sculpture was funded by North West Arts and with a grant from the National Lottery.

Ian Kellgren led the project team with the head of the Probationary Services Partnership, Trevor Beckett who encouraged the idea. Mr Kellgren said: “Normally they would have no opportunity to do this” 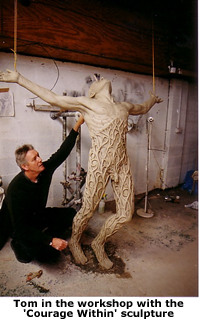 He says the concept of a sculpture with courage as its theme grew out of them and Tom Murphy was approached for help.

Tom Murphy said: “I thought it was an interesting challenge and visited the hostel regularly to discuss ideas and even ran a few practical workshops.

“After spending time with the lads we came up with this figure. It was a matter of them re-inventing themselves and is a very powerful and spiritual piece as a result. One of my best works so far.

“It is a metaphor for movement and change and I hope it does transform people’s lives.

“Everyone hits a bad patch at sometime and this is about hope for the future.”

The statue was unveiled by Gary Mavers, the star of ITV’s Peak Practice.

He said: “I hope that this sculpture will be an inspiration for the lads who end up here and help them understand that courage comes from inside.”