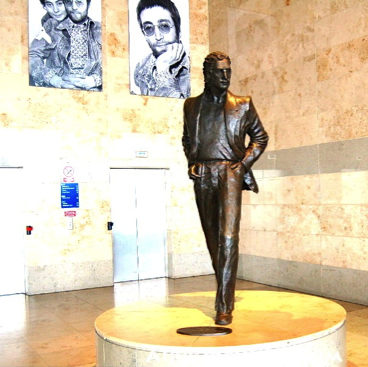 When Liverpool Airport was renamed ‘Liverpool John Lennon Airport’ in March 2002, Tom was asked to design the sculpture that would be the focal point of the newly named Airport. “He’s doing the Liverpool swagger.” said Tom Murphy.

At the unveiling of the John Lennon statue, Tom was accompanied by John’s widow Yoko Ono, and the Prime Ministers wife, Cherie Blair. Cherie was visibly excited at this event and she said: “It’s such a special occasion for me to be back here in Liverpool.”

“I was six weeks old when I came to Liverpool in 1954. All through my teenage years in the 60’s and 70’s, it was a tremendous time to be growing up here.

“We are so proud of Liverpool beacuse of what John Lennon and The Beatles represented – the best of the Merseyside character.”

The statue was unveiled just next to the new £32.5 million passenger terminal.

Liverpool Airport is the first UK airport to be named after an individual; other airports which have paid tribute in this way are John F Kennedy (New York), Josef Strauss (Munich) and Leonardo da Vinci (Rome). As Europe’s fastest growing airport, the Liverpool John Lennon Airport has 2 million passengers per annum and a 52% increase in passenger numbers recorded last year. 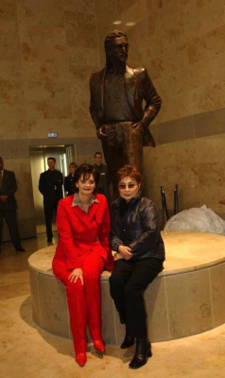 The new logo for the airport includes the famous self portrait drawing by John Lennon, and the strapline “above us only sky”, taken from the lyrics of Lennon’s “Imagine”, one of the most popular songs of all time.

Yoko Ono said of the sculpture: “It’s brilliant. I think it captures John and shows him moving, alive, rather than standing still like some statues.”

“The world needs more communication and this Liverpool John Lennon Airport will promote the growth of international communication for Liverpool and the world.” she added.

Later on that year in July, Tom was invited to meet the Queen, as part of her Golden Jubilee, along with Yoko Ono for the grand opening of the new terminal at Liverpool John Lennon Airport.

Wearing a pastel green suit, the Queen chatted informally with Yoko, and with Tom, who designed and built the John Lennon statue in the terminal building.

Tom said: “I chatted to the Queen about my four-year-old son who loves beatles songs.

“I said to her ‘you must have met John a few times’ and she said she had, and we both agreed that he was great fun.

“I told her like good wine his songs had mellowed with time and she agreed. She also added that she thought the statue was really nice.”