In 1997, Tom donated a sculpture of the late Diana, Princess of Wales to Liverpool Women’s Hospital.

It was unveiled by Rosie Cooper, former chairman of the Trust at the Women’s Hospital.  Diana’s last official engagement as H.R.H. The Princess of Wales, was to open the Liverpool Women’s Hospital.

At the unveiling, Rosie Cooper said:

“This magnificent sculpture will act as a permanent yet poignant tribute to Diana and a reminder of a day she made so special for our staff and patients.

“We are indebted to Tom Murphy for presenting this beautiful gift to the hospital and extend to him our heartfelt thanks”. 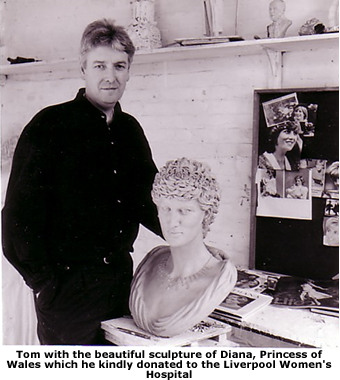