A large sculpture of Sir John & Cecil Moores was unveiled outside Littlewoods PLC in Church Street, in the heart of Liverpool City Centre. 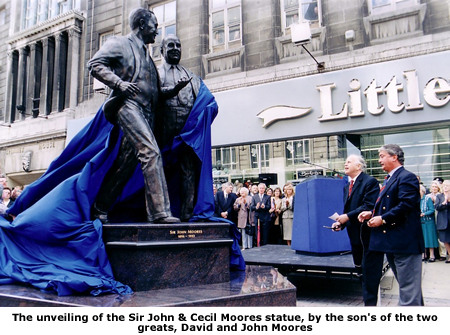 Positioned where thousands of people see the breath-taking statue everyday, the Sir John & Cecil Moores sculpture is one that is well-known not just around Liverpool but around the North West.

The statue was unveiled by the son’s of the two Liverpool greats, Liverpool Football Club’s shareholder David Moores and Chancellor John Moores.

Outside Littlewoods, the sculpture is in the main shopping area of Liverpool and will be there for many years to come.